From a strategic perspective, the digital transformation implies the merging of knowledge and systems architectures and consequently a seamless representation of contexts (data), processes and supporting systems (information), and objectives and strategies (knowledge). That can be best achieved with ontologies.

Ontologies take a special significance for enterprise architecture which, in contrast to systems’ architecture, must maintain a continuous and consistent representation of business environments and objectives.

Ontologies are especially relevant for requirements, when business analysts, project managers, and system architects have to agree about scope (domain or architecture), and development model (Agile or phased).

To demonstrate the benefits of the approach an OWL 2 kernel is proposed to build an EA conceptual thesaurus. That kernel is meant to be formal (based on axioms) and neutral (no modeling assumption). It ensues that OWL 2 primitives can be used to check the consistency of representations, paving the way to the development of platform-specific interfaces and model-based engineering.

The Caminao kernel (or Cake) is built around four kinds of things (in OWL 2 parlance), plus one for individuals, corresponding to the epistemic nature of targeted elements:

Descriptions without external instances of their own: Aspects cannot be directly instantiated (or identified) in environments; they can only exist as digital components in systems.

Symbolic descriptions of sets of objects or phenomena: Categories can be associated with actual (descriptive, extensional) or intended (prescriptive, intensional) sets of instances.

Entries for documents represent the symbolic contents, with instances representing the actual (physical or digital) documents.

The kernel uses OWL 2 hierarchies (yellow lines) to organize entries on a conceptual basis meant to be neutral with regard to abstraction semantics. For example, systems are defined in terms of agent and artifacts without any assumption regarding inheritance.

Since aspects are not meant to directly represent individuals in domains, they can be defined in terms of established systems’ generic of functional constructs:

The same distinction between system and enterprise levels is maintained for object properties, marking the difference between neutral OWL 2 semantics (yellow lines) and kernel’s specific ones (blue lines).

Beside the thesaurus ones (kernelBw_ and kernelFw_), kernel connectors are aligned with ontological levels:

To be ecumenical while ensuring semantic consistency, the thesaurus is built on a limited set of unambiguous axioms:

On that account, and assuming standard logic, seven axioms are to constitute the semantic scale of the kernel :

Set of instances managed uniformly, independently of their nature.

The ability of an instance to change the state of instances, including itself: Objects are either active (with behavior) or passive (without behavior), and the propriety is exclusive.

Change in the state of objects and phenomena: External events are changes triggered from outside the organization or system under consideration.

These axioms serve as roots and firebreaks in acyclic semantic networks of EA definitions. For example: 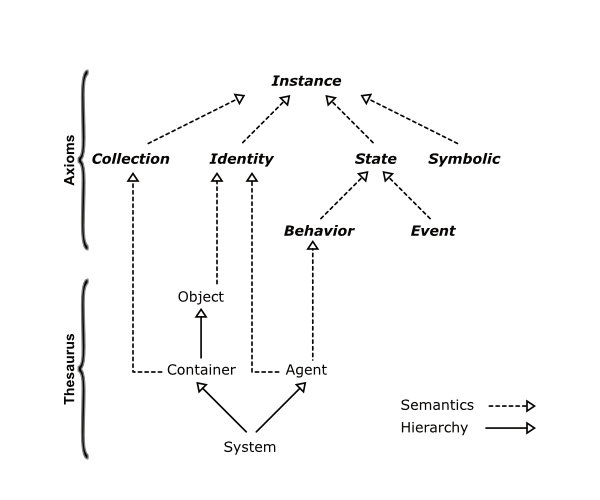 Semantic connectors are introduced to ensure the traceability of definitions and eliminate circular references.

How definitions are built (backward traceability):

How definitions are used (forward traceability):

Combined with the layered organization (axioms and acyclic networks for semantics, graphs for EA knowledge), these connectors can be used to check the consistency (e.g., no circular reasoning), of definitions.

The objective of the thesaurus is not to achieve any kind of truth but to build a basic set of necessary definitions that could be consistently extended and customized depending on business and engineering contexts.

To that end contents must be organized along enterprise architecture perspectives, and views easily defined.

To begin with, hierarchies should remain neutral with regard to modeling methods and languages. On that account their semantics should be limited to conceptual relationships, without any specific meaning regarding abstraction semantics, in particular with regard to inheritance.

Then, specific EA semantics should be expressed in terms of EA capabilities and descriptive models. Assuming that the semantics of prescriptive models can be aligned with established Object Oriented modeling principles, they are not covered at this point.

From that starting point, the thesaurus should enable both iterative and phased approaches: build descriptive models either iteratively or through modeling steps:

Basic examples will be taken from a typical restaurant business with five basic domains:

To display the examples: