As the world turns digital, the divides between social lives, corporate businesses, and physical realities are progressively dissolved. That calls for  some unified modeling framework that would supplement OMG’s unified modeling language (UML).

Taking a leaf from the Stanford University’s Symbolic Systems Program:

“Computer systems, robots, and people are all examples of symbolic systems, agents that use meaningful symbols to represent the world around them so as to communicate and generally act in the world,”

the objective would be to consolidate the modeling concepts supporting the symbolic representation of those agents.

Insofar as enterprises are concerned, models can serve three kinds of purposes:

Models can be classified with regard of scope (partial or full description of features), and target (actual occurrences or types):

Since analysis models describe specific business domains they are usually partial and extensional. On the contrary,  as design models are used to generate software components, they are to be intensional and complete.

The significance of this modeling paradigm is best understood when compared to the one upheld for systems by the Object Management Group (OMG):

“A UML model consists of three major categories of model elements [classifiers, events, and behaviors], each of which may be used to make statements about different kinds of individual things within the system being modeled.” 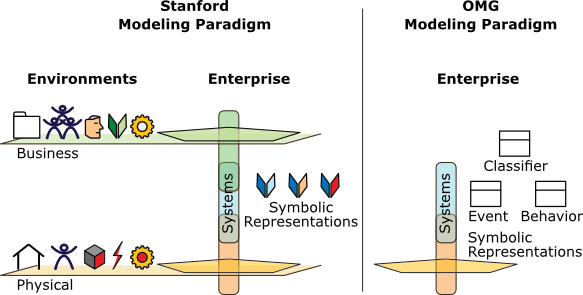 Constraining representations into classifiers, events, or behaviors may have limited impact at the application level, but that’s not the case at the systems and enterprise levels, where that one-sided approach introduces clear modeling fault lines, in particular:

The first step is therefore to characterize modeling languages with regard to scope:

While those languages can be combined, e.g., DSLs coupled with UML or BPM, there is no consolidated representation of targets’ content except for predefined ones, e.g., by ERPs.

From Conceptual Models to Architecture Capabilities

By bringing enterprise and system concepts under a seamless modeling framework this paradigm should provide the backbone of enterprise architecture.

On one hand conceptual models describe business context and enterprise organization and processes. On the other hand architecture capabilities specify what kind of support the systems can provide to processes. In between the functional models define the symbolic representations meant to realize the capabilities.

Software components (for symbolic representations) and resources deployment (for capabilities) are hidden as implementations.

Along that understanding, and beyond lexical controversies, it ensues that two basic scales are to be aligned:

From Zachman Framework to The Pagoda Blueprint

Despite its conceptual consistency and clarity of purpose, the actual imprint of the Zachman framework has remain limited. The Caminao assumption is that a simple cosmetic transformations could pave the way to a broader adoption of its basic principles.

To begin with, the tabular representation is replaced by a geometric one, each of the three main columns being morphed into a pentagon representing architecture capabilities at organizational, functional, and technical level.

The layers are then organized as a pagoda blueprint and aligned with model based systems engineering (MBSE):

The next step is to unify the symbolic representation of agents endowed with symbolic processing capability and their behaviors:

Modeling scopes can be generalized and characterized with regard to visibility and synchronization with their target:

UML can then be used to bring views and models together:

Yet, the most significant benefits are achieved when model based system engineering is used to bring together conceptual models and enterprise architectures.

Long secure behind organizational and technical fences, enterprises must now navigate through open digitized business environments and markets. For business processes it means a seamless integration with supporting applications; for corporate governance it means keeping track of heterogeneous and changing business contexts and concerns while assessing the capability of organizations and systems to cope, adjust, and improve. For that purpose ontologies could be used to bring architectures and environments modeling into a common paradigm.

Ontologies are systematic accounts of existence for whatever is considered, in other words some explicit specification of the concepts meant to make sense of a universe of discourse. From that starting point three basic observations can be made:

With regard to models, only the second one puts ontologies apart: contrary to models, ontologies are about understanding and not supposed to be tied to empirical purposes. That makes them a perfect tool for enterprise architects.

Confronted to the generalization of digitized environments, enterprise architects have to  deal with a two-pronged challenge: on one hand waves of raw data have to be continuously fed to information systems; on the other hand knowledge management and decision-making processes have to be integrated with operations. Both requirements can be served by the ecumenical nature of ontologies.

Regarding open and partially defined business environments, architecture capabilities can be crossed with ontologies aligned with the nature of contexts and their impact on enterprise governance e.g:

That coarse-grained taxonomy of contexts can be combined with a fine-grained one set along the epistemic nature of targeted items, namely the semantics of individuals: terms, documents, symbolic representations, or actual objects and phenomena. That would outline four basic concerns that may or may not be combined:

Beyond the integration of business processes and supporting engineering, using profiled ontologies to frame enterprise information and knowledge is to significantly enhance transparency and traceability, as illustrated by a simple example:

An ontological kernel has been developed with Protégé/OWL 2, a beta version being available for comments on the Stanford/Protégé portal using the link: Caminao Ontological Kernel (CaKe_WIP).